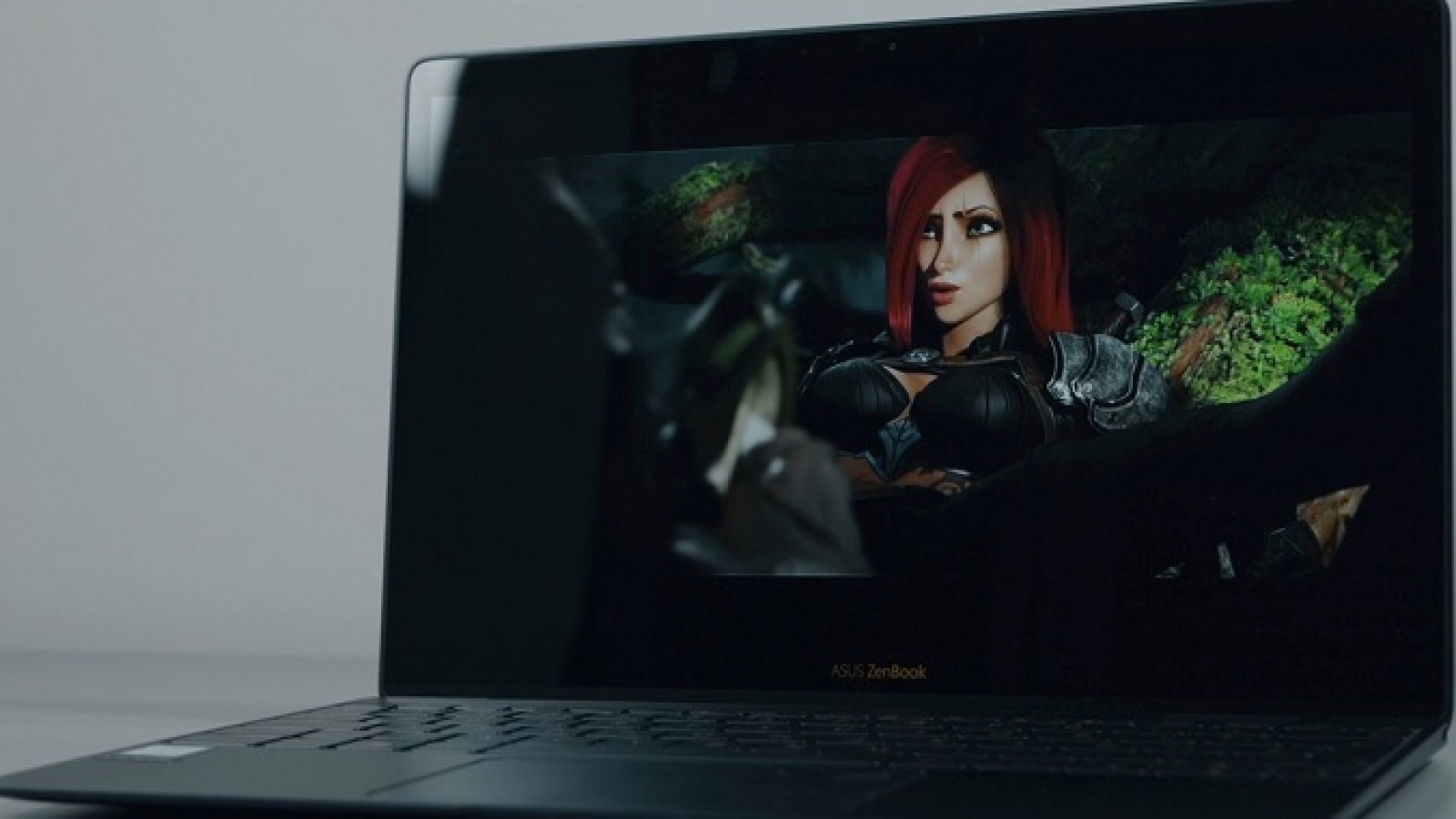 The series of notebooks Asus ZenBook was devised as ultrabooks from the outset, but with the arrival of ZenBook 3 demonstrates that this type of portable no longer need to cut back on power to maintain its thinness and lightness. In many respects, the ZenBook 3 could be confused with a tablet on the table, only 11.9 mm thick and its screen 12.5 inches.

Within the sector ultrabooks, it is more competition MacBook Apple than other similar equipment, while maintaining some of its disadvantages as a single USB 3.0 connector type C. But it has been the first to have one of the new Kaby processors Lake-U, and according to model will have a Core i5-7200U or a Core i7-7500U. But because of the product it is, it is oriented to a professional sector and not the average consumer.

This ultrabook has an aluminum housing, and maintains the concentric on its top circles of previous models, although he added a gold rim. The model analyzed arrives in blue, although Asus also sells it in colors pink gold and quartz gray. It improved weight, lowering it to a mere 910 g, which together with its similar to a sheet size, can be transported comfortably alongside papers and forth. To make things even easier, Asus sells it together with a quality case to protect it in transport.

The screen includes is 12.5 inches IPS type with little framework and integrated webcam at the top, and has a resolution of 1920 x 1080 pixels. The finish of the same is type brightness, reason why it can introduce a good amount of reflections, mainly in exteriors. In return, a layer Gorilla Glass 4, quite effective, and an oleophobic layer protect it although it is not a touch screen.

The laptop includes a small fan of only 3 mm thick, and in the central area of the hinge can see the air outlet. The hinge, which is not flip-flop although by the type of product makes wanting it to be a convertible, keeps the screen at an angle of up to 45º with the table.

The keyboard has also received special attention to reduce the thickness of the laptop to a mere 11.9 mm at its thickest part, because the key travel is limited by Asus to 0.8 mm, and a distance between keys 19.8 mm. At the time of typing the result is nice, and making the action point of the keys is so short will improve the writing speed, but in turn will need some adaptation time if you are used to harder keyboards. It has backlighting, another of the added on this occasion, adjustable in intensity.

The touchpad is one of the best I’ve had in a portable, and has a layer of glass to make it more pleasant to touch and improve accuracy. Palm rejection technologies have been added to prevent unwanted touches when writing. Asus has developed its own touch panel controller, with a good result, which also allows them to add a handwriting tool with it – even if it is not very intuitive.

It includes a fingerprint reader in its upper right corner, which is configured to unlock the computer using Windows Hello. Requires the creation of a pin to unlock the computer apart from the password. The reading of the fingerprint is quick, but when configuring the first fingerprint – it requires that the reader is touched around ten times -, it did not recognize the fingerprint for unlocking at all angles. Recognition requires a trial-and-error period until you get Windows to recognize your finger well in any position the reader touches.

Another change that includes this ZenBook is that it has four speakers in total, two of them located at the top of the keyboard and two on the lower front, with easily identifiable grids. They are developed with Harman Kardon, and have very good quality for speakers of ultrabook. The system is oriented to provide surround sound, and the set has great power and does not distort even if it is set to the maximum.

The device has only two connectors: a 3.5mm four-pin headset with a microphone, and a USB 3.0 type C. It’s the same situation that happened on the MacBook reworked by Apple last year, with the same disadvantages. This jack is also used to recharge the laptop and also to take video signal, so you have to use some of the many external adapters for several connections. Fortunately, Asus provides an adapter with a Type A USB output, an HDMI and a USB Type C, although it sells separately another adapter with many more connections. In this case, it is advisable to accompany the laptop is a Bluetooth mouse and take away the hassle of having to be aware of this adapter or others.

You may also like to red another article on TheKindle3Books: HP Spectre, the incredibly thin laptop leaves us surprises

The Core i7-7500U processor is an incremental improvement i7-6500U, widely used in ultrabooks 2016 as well as notebooks that are located on the 500-600 euros, or even more depending on the type of storage and display. It is a processor considerably more powerful than its predecessor is, but cannot be asked for miracles. It is a team strongly oriented to office work rather than design work or editing, but will also be very capable in both fields in a casual way. Personally, I do not feel comfortable using Photoshop or programming on such small screens, but the important thing is that this computer can take you anywhere and solve specific problems without bothering to carry it.

The integrated graphics processor is the new Intel HD 620, and whose main novelty is announced in his presentation that can play 4K content natively. It is not something that will affect this ultrabook with its 1080p screen, but you can connect an external monitor of this type with the included adapter for Asus, since it has an HDMI output that lets you take video at 4K and 60 FPS. While the only monitor can move it well, playing 4K video as a second monitor, it will do so with microtirons, so it will not be a smooth experience.

Although not designed for it, adjusting the screen resolution to 1366 x 768 px. With which you will still see quite well, would even play. In games, League of Legends or World of Warcraft with a medium-low settings can operate at 40-50 FPS. Although it’s a team to work with, everyone likes to relax from time to time, and ZenBook 3 allows you to do it with games that are not overly demanding.

ZenBook screen 3 UX390UA is 12.5 inches IPS type of FHD, and has a high – quality color reproduction, with good viewing angles. It has a maximum brightness around 350 nits and 1200:1 contrast, with a 60 Hz screen refresh. It is calibrated for the sRGB color range, promising to cover 72% of the NTSC range or 100% of the SRGB, but in practice, it does not cover more than 90% of it.

The notebook includes the tool ASUS Splendid to adjust various parameters of color, and even calibrate will greatly improve their quality of color reproduction -only will notice those who are accustomed to best- screens, this tool also used for other things. It has an eye care adjustment to change the white point, the range, or set a color temperature that pleases the user more.

A display problem for some users will be its gloss finish, as it can be quite annoying reflections, but in return you gain in full sharpness of the pixels. Aspect ratio 16: 9 is good for watching videos but not to work, that would be the purpose of this ultrabook. Some companies have accepted this fact in their convertibles and tablets with Windows 10, as is the case of the Surface Pro, and is an aspect that Asus should take into account for a next iteration of the ZenBook.

In the storage section, this equipment has a 512 GB SSD, which will be more than enough for its intended use in mobility. It is a Canvas SC300 from SK Hynix, with a SATA3 interface. The sequential maximum read-write speeds reach 538 and 248 MB / s, and are within expectations for this type of storage, although the main advantage of SSDs is always the shorter access time to information.

Being a small notebook, almost a tablet, it is curious to include a thin fan only 3 mm thick. As Core i7-7500U processors of other equipment can arrive with reduced power to limit the heat, Asus has chosen to leave it with its 25 W of maximum TDP and all its performance. That means that it is not enough in such a compact system to use only passive cooling.

The result is that the fan is usually more active than you would like those who want a very silent equipment, but it is not problematic either. At rest, the fan is not heard, and when it starts to demand a little of the equipment is activated but will not be appreciated above a normal ambient noise of about 30 dB. Once the processor is in charge, reaches 37 dB.

In the field of temperatures, the maximum that can reach the housing are about 41° C in the upper right of the keyboard, while the rest of the keyboard is further to 30° C at full load. It is not annoying when it comes to writing or using it. Because of the type of laptop it is, the lower part is slightly cooler, brushing at 39º C, being at the limit of what is suitable for use in the lap depending on the time of year.

The notebook has a 40 WHr battery, which according to Asus is able to reach nine hours of autonomy. In practice, leaving continuously reproduce video clips of YouTube-which involves continuous use of wifi- a calibrated brightness around 200 nits, autonomy reaches about seven hours.

Under other situations more varied will last less, from five to six hours, using some office package, browsing and working with some more demanding programs? If you only see movies, you can expect to arrive at nine o’clock, or if you lower the brightness if the lighting in the room allows it. For the team that is, it has a more than acceptable range.

The charger is 45 W and allows quick charging through the USB connector. In practice, the promised recharging time of about two hours is fulfilled, and with the rapid charge, it can be achieved in about 40 minutes to recharge half the battery.

Asus Zenbook 3, a team that stands out in design and autonomy

Asus has created an example of what the ultrabook can become, but also demonstrates some of the problems that this entails. A single USB 3.0 connector type C is insufficient so that this team could become the principal of a user, but also because it is a small ultrabook should not be thought to use it as such. On the fly may be enough, but adding some additional connector would have been preferable.

The performance of the equipment is located within what can be found in equipment much cheaper, about 500 euros. With the ZenBook 3 what is being paid is how highly integrated it is, its carefully designed aluminum, and can be easily transported. Although in this case, the inclusion of a fan, however tiny, is a source of noise, and although it does not become annoying, prolonged use in these conditions leads to a slight overheating of the right side of the keyboard. But again, this is not a team to do CPU or GPU heavy work, and how much is for some photo editing or video editing occasionally.

In general, the Asus ZenBook 3 is a brilliant computer, with props like its screen or battery life. Its high price makes it clearly aimed at professionals and those who prioritize equipment size and weight of a laptop above other aspects, and not become disappointed by their performance. For the rest of consumers there are many other alternatives cheaper and more powerful, but bigger and heavier.