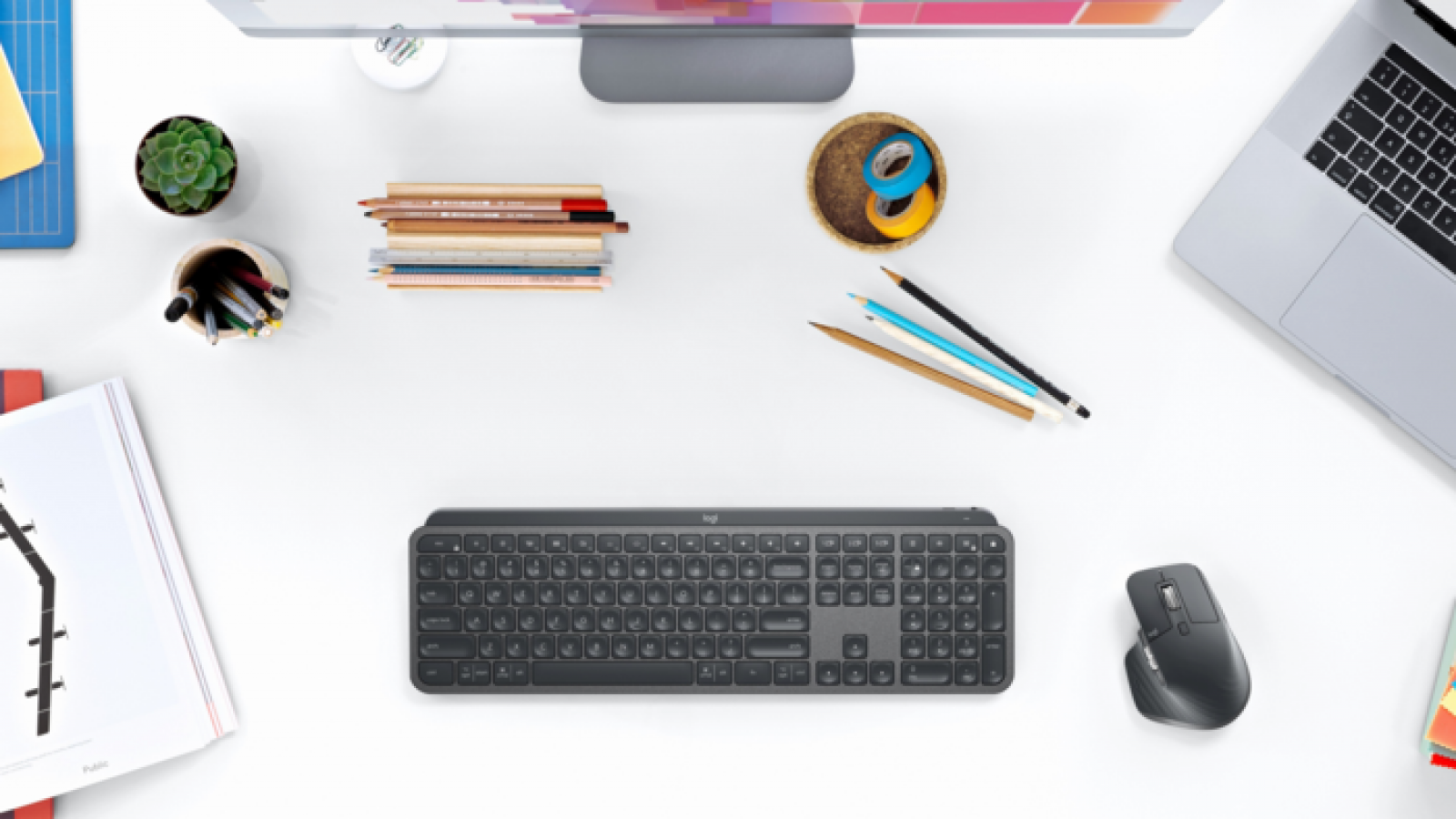 Do you remember Logitech Craft?  It is a keyboard launched a couple of years ago, which has the peculiarity of having a programmable wheel on top of the keyboard itself, which you can associate with various functions depending on the program used. So take this keyboard, deprive it to change the color a bit, and you will have MX Keys, a new model launched a few months ago, which is not exactly “new”.

Logitech MX Keys does not present particular innovations compared to the previous model. It is a robust keyboard, but still not as rigid as you might think, being practically a single block (Logitech states that there is a single metal plate inside). On the bottom, we find 4 rubbers that guarantee good grip on the desk, but there are no levers to change the inclination of the keyboard, just like there were not on the Craft.

At the top, right we find the only status LED present. Usually you won’t notice, but when the battery is scarce it will turn red, inviting you to use the USB-C port on the rear profile for charging (in the package you will find a dedicated cable). Next to this door is the power button: a little hard on the model under test, but these things easily change from one model to another.

In short, this MX Keys is truly a Craft without a wheel, nothing more, nothing less. And if on the one hand having given up on an accessory that probably has not made a break is also good, on the other hand it is a wasted opportunity not to have taken advantage of it to make some necessary adjustments here and there, especially in terms of rigidity and inclination. As a Craft user for a couple of years now, I know well the writing feeling of this keyboard, which I found equal on MX Keys. It is a comfortable model, with which the wrist rest is not essential. It is also quite quiet, so if you liked the keyboard with good sound feedback, you will certainly not be satisfied here. Its main use is in fact in the office environment, in our opinion, where noise is never too good.

The hollowed keys adapt well to the shape of the fingertip, and offer discreet haptic feedback. They are also easy to press from the edge, and do not fear “heavy writing”. Even if Craft’s hold over time had been inherited from this MX Keys, you won’t have any problems even after years of use.

It is not one of those keyboards, however, that give a nice pleasure of writing, favoring comfort and stability over everything else. This is also why we place it well in a generic work environment, but it would not be the first choice we would offer to a writer looking for inspiration.

MX Keys is also as wide as possible, with all the multimedia controls and toggles you want, in addition to the numeric keypad. Above the latter, there are 4 other customizable keys, by default used for screenshots (in fact the “stamp” key is missing), calculator, right click and to put the PC on standby.

The connection is via Bluetooth, and you can pair up to 3 different devices simultaneously, switching from one to the other with the push of a button. As an alternative to Bluetooth, in case the connection is not sufficiently stable or if you have a device that does not have one, you can use the USB dongle with Logitech Unifying wireless technology, included in the package.

There are also keys dedicated to both Windows and macOS, confirming the multi-device vocation of this keyboard, which works without problems even with iOS and Android.

The backlight always remains beautiful. Powerful, precise on every single key and clearly visible even during the day. In everyday use, I like to keep it on to have a better glance on the keyboard, even if its impact on autonomy is considerable.

In our office use, we have never reached 2 full weeks, or 10 days, as the company would have intended, probably also because we have always kept the brightness at maximum. Deactivating it, you should get to 5 months, again according to Logitech. We haven’t been using MX Keys for so long that we can confirm it or not, but based on the use with Craft we would say more than 4 than 5 months. But after all the keyboard we “squeeze” it very much every day, and in any case giving it 4 refills a year will not be a tragedy, right?

MX Keys is not a real revolution, indeed it is more a reinterpretation. Reinterpretation of the Craft keyboard, from which this new model inherits practically everything, except the multifunction wheel. On the one hand it is a shame not to have taken the opportunity for some improvements, on the other hand you will still have a keyboard that goes well with office use (for a whole series of reasons we have discussed above) and above all that it costs practically half of the aforementioned Craft.